House on the rock 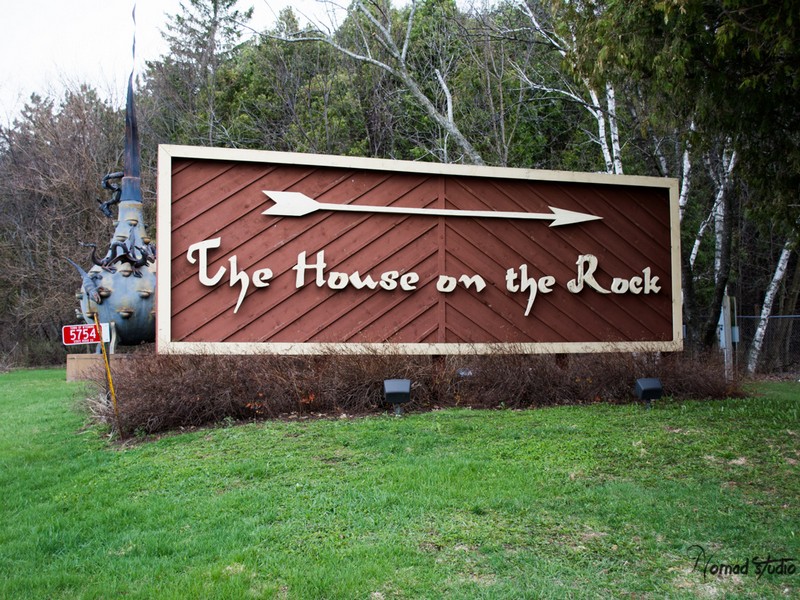 STORY BEHIND THE BUILDING:
One story told by Sid Boyum is that Alex Jordan built House on the rock purposefully near F.L wright’s Taliesin in order to spite him. It seems that Boyum with Jordan.Sr once drove to Taliesin to show Wright the plans for a building, the Villa Maria in Madison. Jordan.Sr was a big fan of wright’s works & principles. So he hoped to get his appreciation from his inspiration. But Wright looked at the plans and told Jordan: “I wouldn’t hire you to design a cheese crate or a chicken coop. You’re not capable.” On their way back, livid Jordan pointed to a spire of rock and told Boyum: “I’m going to put up a Japanese house on one of those pinnacle rocks and advertise it.”
On the contrary, many tried to question the legitimacy of Boyum’s story. The official website of House on the rock Quotes their justification as “When we researched this story, we could find no evidence that this ever happened and we doubt the validity of the story for the following reasons:
The Villa Maria was built in 1923 and it was designed by well-known, Architect Frank Riley and not designed by Alex Jordan, Sr.
Both Sid Boyum and Alex Jordan were born in 1914 and would have been less than 9 years old when this story was to have happened. Frank Lloyd Wright (1867-1959) would have been over 50 years old and unlikely to have known the 9 year old Sid Boyum.
Frank Lloyd Wright was in Japan working on the Imperial Hotel project from 1916-1922 and would not have likely been in Spring Green when this story was to have happened. While both men designed highly visited homes in Spring Green, we do not think they ever met or that their paths ever crossed.” – Source
THE ORIGINAL HOUSE:
Alex Jordan visualized this building as his lifetime achievement. He pictured this creation to become an architectural marvel & designed them. In 1940s Jordan.Jr took over this project to fulfill his dad’s dream. Adding to the house, he built many attraction rooms around the place and wanted it to be a no.1 tourist attraction.

The House On The Rock opened to the public in 1959. Alex Jordan owned the place until 1988. On December 15, 1988 he sold the House on the Rock to Art and Karen Donaldson. The Donaldson’s still own and operate the house on the Rock and continue to build upon Alex Jordan’s dreams and visions. 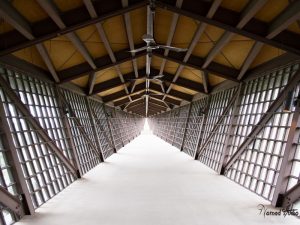 The attraction itself is divided into three different sections. The first section has the house & infinity room. The house is seated on a 60ft high rock .The ceiling in house is unusually low & the rooms are dark. Walking through the house made me feel that I am in a cave and not top of a cliff. The bronze artifacts and stained glass lamps were on display.

The highlight of the structure is the Infinity room. It cantilevers about 218ft to give a panoramic view of the valley through the glass walls. The room is located 156ft above the forest and the end of the room is sloped to give the infinity effect. The attractions are connected with a 375 ft covered ramp. There is a Japanese garden with 14 ft quadruple waterfalls and a contemplative koi pond. The Stroll style pond encourages the visitors to take a break and enjoy the nature.

The rooms in the second and third sections were added at different point of time in the decade. It includes Streets of yesterday, the heritage of sea building, Music of yesterday, the spirit of aviation, the carousel, the organ room, Inspiration point, Doll house, Circus building, oriental room, armor & weapon collections, Crown jewel collection and Doll Carousel. Most of the collections here are recreated and some are real.
Visit the site here to know more about the attractions.

Personal experience about the visit

The infinity room is best and unique among all the attractions I would say. Our expectations were more before the visit as it is said that the earlier structures like the House on the Rock itself, the Gate House, and the Mill House, are reminiscent of the work of Frank Lloyd Wright. But they were very much less resonant to wright’s works. Though there were lots of attractions, they seem to be less impressive in educative and architectural point of view. The Japanese garden is a nice place to experience during the summer & spring seasons. There are a large number of musical instruments that play by itself if you drop the token they give you while purchasing the ticket. They are interesting to watch if you are a lover of musical instruments. The doll house, circus and doll carousel give a scary effect while we walk through the exhibits.

To book your tickets, visit here.
PHOTOGRAPHY : Allowed in all the attractions.

Here are some of the photos of the attractions inside.